This particular blog post was sitting on my mind for a long time. I don't want to start a flame war, but at the same time I also don't wish for Linux community to build and grow upon ad-hoc solutions that we've accumulated over the last 30 years to the packaging and deployment problems.

They'll soon realize there are many routine tasks and there is a benefit of automating them. In old days they'd write a collection of bash scripts, but today we have frameworks in most popular languages to refactor imperative steps and reuse them. Let's call this method Automated Imperative Configuration (as implemented for example in Chef (Ruby) or Fabric (Python)).

Code complexity and the need of a documented operating system soon inspired our Linux user to think further. What if they built one layer of abstraction on top of those steps and rather describe the end state of the system we'd like the Linux machine to be and the underlying system will take care of examining state and executing commands to do so? Something like we use SQL everyday, to focus on WHAT instead of HOW. Let's call this method Declarative Configuration (as implemented for example in Puppet and Ansible)

Taking declarative configuration to the next level

However, there is one huge, seriously huge penalty due to our new abstraction layer. Even more code complexity hidden below the declarative configuration statement someone needed write. Let me explain.

Our tool needs to figure out

There were three steps needed to accomplish such task. The problematic part of such system is the fact our tool had to connect to the machine and examine all of the edge cases that machine state could be in and decide based on the state what imperative tasks to execute. Let's call this method stateful declarative configuration.

Trivial example shown above does not demonstrate how number of combinations of machine states grows exponentially once a decent amount of services interoperate on a Linux machine. Many edge cases our code below delaractive configuration has to cover. Anyone developing Puppet/Chef recipes will be able to explain you this phenomenon in practice.

What if we design our declarative configuration model to be stateless? This would greatly reduce complexity, amounts of code written and at the same time also make it way simpler to explain how different components are written.

Before we dive into that, let's see another real world example of stateful vs. stateless solutions to the following problem:

Our stateless solution did not require a database to keep the state. Actually all the state is transfered over the network, so you could say network is our database or that we don't have any state.

For more about this solution see My Favorite Database is the Network.

Obviously I'm heading to the idea of packaging software and configuring Linux machines (or any other operating system) statelessly. Let's call it stateless declarative configuration.

Stateless configuration is a consequence of good design of a system (as we have seen for the trivial example of validating email addresses for a website).

I'm not going to propose how to design such operating system to be stateless, because Eelco Dolstra (with two co-authors) already did for us in a scientific paper and we can use such linux distribution with all the benefits of the clean design today.

I will instead summarize (part of) the NixOS Linux distribution design (do read the paper, it's small and slowly explains the motivation and the design) to achieve stateless configuration.

Grab a coffee/tea, relax, get ready.

If you think about how packages are installed on a Linux distribution it's summed up in the following diagram: 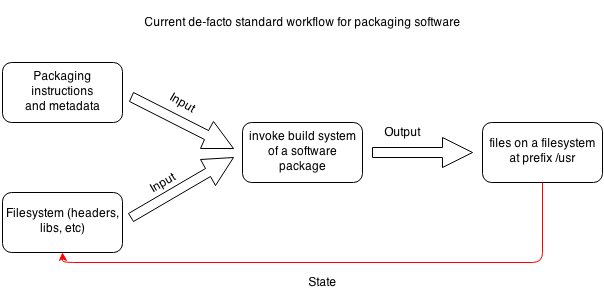 That's our state. Filesystem is our primitive, hierarchical database that's making our solutions complex and non-deterministic.

/usr could be represented as a table in our database and package does lookups by filename inside /usr/lib, /usr/include and so on. Contents inside those directories will affect our building results. What's worse, building systems will look into other directories such as /usr/local/ or /opt to determine packaging requirement files.

In case you still don't believe me this method goes soon out of control, read this.

Removing our filesystem as a state we get the following workflow:

We've changed only one thing:

Output files of a successful build are stored under unique $PREFIX directory, so as long as we can map the package name from packaging metadata to its $PREFIX, we can deterministically say headers in $PREFIX/include belong to that specific package.

No more global prefixes such as /usr, /usr/local, /opt from FHS. Software which doesn't assume too much about their prefix will still just work.

While we're at rethinking packaging, let's go for deterministic builds. Packaging output should depend only on packaging instructions we've written.

Actually all that said, we have to carefully pick a language to specify packaging instructions in it.

Our package manager is implemented as a Purely Functional Language.

Pure function is a function without side-effects. Output only depends on the input of the function, nothing else should affect it's output. If it does, it's a bug in the implementation of the language. For example random() is not a pure function, since it takes no input and returns a different results for the same input. By choosing such a language we make sure it's not possible to introduce any state inside our packaging instructions.

Our package manager is called Nix. Nix tries very hard to be deterministic. It stores all build packages at unique prefix and mounts them as read-only to ensure nothing will change the output of the building process once it's done.

It goes as far as changing timestamps from all files inside the prefix to unixtime + 1. Time is a side effect of our build, since two sequential runs should return same result. Term coined to describe packages built with no side-effects is Purity.

Features as a consequence of stateless design

Often developers would say package managers we use nowadays could adopt this philosophy. I agree, but they would have to be completely re-designed and keeping backwards compatiblity would be of a great challange, if not just impossible.

If any of these inputs change, our nginx is restarted. No code needed to be written.

Example: configure our nginx to build with rtmp support

Docker tries to achieve deterministic builds by isolating your service, building it from a snapshotted OS and running imperative steps on top of it.

Is that the future of Linux configuration management and packaging? I certainly hope not. It's useful for many things, but I don't imagine you'll run your desktop this way.

Will more distributions go for stateless design in the future?